What is the SI joint?

The sacroiliac joint, otherwise referred to as the SI joint, is made up of your sacrum and your ilium.  The ilium is sometimes referred to as your hip bone in layman’s terms.  To demonstrate where you ilium starts, you can feel both sides by putting your hands on the sides of your waist.  At this point, you are touching the iliac crest, which is a portion of the ilium. 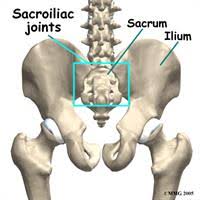 The SI joint is a bit of an enigma.  While I was instructing cadaver anatomy, there was always a debate between professors concerning whether or not the SI joint actually moved.  The arguments were along the lines of “it is a joint so it has to move based on its anatomical classification” vs “the SI joint is so entrenched with ligaments that it is impossible for it to move and should be reclassified”.  I promise you that these academic debates usually put me to sleep.  Thank god we did not have smart phones at the time because I’m sure I would have played some angry birds while two PhD’s argued over SI joint movement.  Little did I know that these minor debates would be very helpful once I became a clinician.

Does the SI joint move?    In my opinion, the SI joints do move, but they are not supposed to move much.  When the SI joints move too much, you get instability. This will present similar to disc herniation pain except the orthopedic test will be negative for a disc problem or an MRI will be clean.  Most patients feel like their legs are going to give out when they rise from a seated position.  They will grab for the area of the SI versus trying to brace with their arms on the front of their legs. When the SI joints are too stiff, you get sharp pain and lack of mobility.  This is when you feel stiffness and pain when bending forward and backwards, but it doesn’t feel like the symptoms are completely in your lower back.  People tend to get also develop hip pain because the hips and lower back are trying to make up for the lack of movement.  It will look something like this:

The more difficult challenge is differentiating SI joint pain from lower back pain.  Typically it is easier to treat both at the same time.  First you want to determine whether or not the SI problem is due to instability or lack of mobility.  This can be simply done with an exam and history. Then you want to tailor treatment towards you goal of improving stability or improving mobility.  Improving mobility would require soft tissue work, chiropractic and some core stability.  Improving stability would consist of stabilizing exercises and soft tissue with less chiropractic adjusting until stability is achieved.

I usually see this in cross-fit athletes who are performing a large amount of swings or Olympic lifts, women post-pregnancy when everything is starting to settle down and tighten back up, or commuters who perform a large amount of driving.  Either way, properly diagnosing the SI joint problem is the key to successful treatment when it comes to SI joint issues.

Dr. Derek Gearhart is a highly educated sports medicine chiropractor with over 10 years’ experience assessing movement patterns and identifying and treating injuries in athletes and active individuals. His certifications are used at the highest level of evaluation and soft tissue treatment in sports medicine. He is the primary doctor at Bucks Sports Chiropractic and an anatomy and physiology adjunct faculty member for the Science Technology Engineering and Math program at Bucks County Community College.

Get Our Best Articles By Email