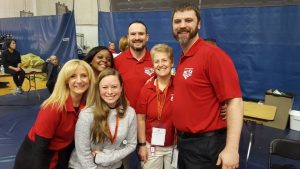 Over the weekend, Buck County resident Dr. Derek Gearhart of Bucks Sports Chiropractic was invited to be part of the medical team at the 2018 collegiate national championships in Washington, DC for the National Collegiate Taekwondo Association (NCTA). Dr. Gearhart was part of a 10-person team consisting of Orthopedists, Sports Chiropractors, Sports Physical Therapists and Certified Athletic Trainers. Along with his colleagues, Dr. Derek was ringside for the event acting as emergency medicine, athletic training personnel and injury evaluation medics. The event was held at Bender Arena on the campus of American University, where the Cherry Blossoms were in full bloom. About 600 men and women, including representatives from Penn State and the University of Pennsylvania, competed in roughly 600 single-elimination matches.  Dr. Derek evaluated concussions, performed the patent Active Release Technique and Hawk Grips Therapy to muscular injuries, provided chiropractic care and administered basic contact sport duties.  His primary responsibility was to be ringside to help with abrasions, nose bleeds, potential concussions and other injuries sustained on the floor during a full-contact taekwondo match. During the match, medical providers were asked by referees to evaluate the athlete within a 1-minute time frame to determine if the athlete was medically able to continue the match.  Providers also had that 1-minute time frame to stop nose bleeds, assess for potential bone breaks and determine if the athlete was coherent and able to participate following dangerous blows, such as a kick to the head. Dr. Derek even stabilized a dehydrated athlete who passed out in the middle of a match, falling onto her back. Dr. Derek represented the Bucks County area very well with his professionalism, teamwork in an integrated setting, and advanced knowledge and experience in sports medicine.

Dr. Derek Gearhart is a highly educated sports medicine chiropractor with over 10 years’ experience assessing movement patterns and identifying and treating injuries in athletes and active individuals. His certifications are used at the highest level of evaluation and soft tissue treatment in sports medicine. He is the primary doctor at Bucks Sports Chiropractic and an anatomy and physiology adjunct faculty member for the Science Technology Engineering and Math program at Bucks County Community College.

Get Our Best Articles By Email